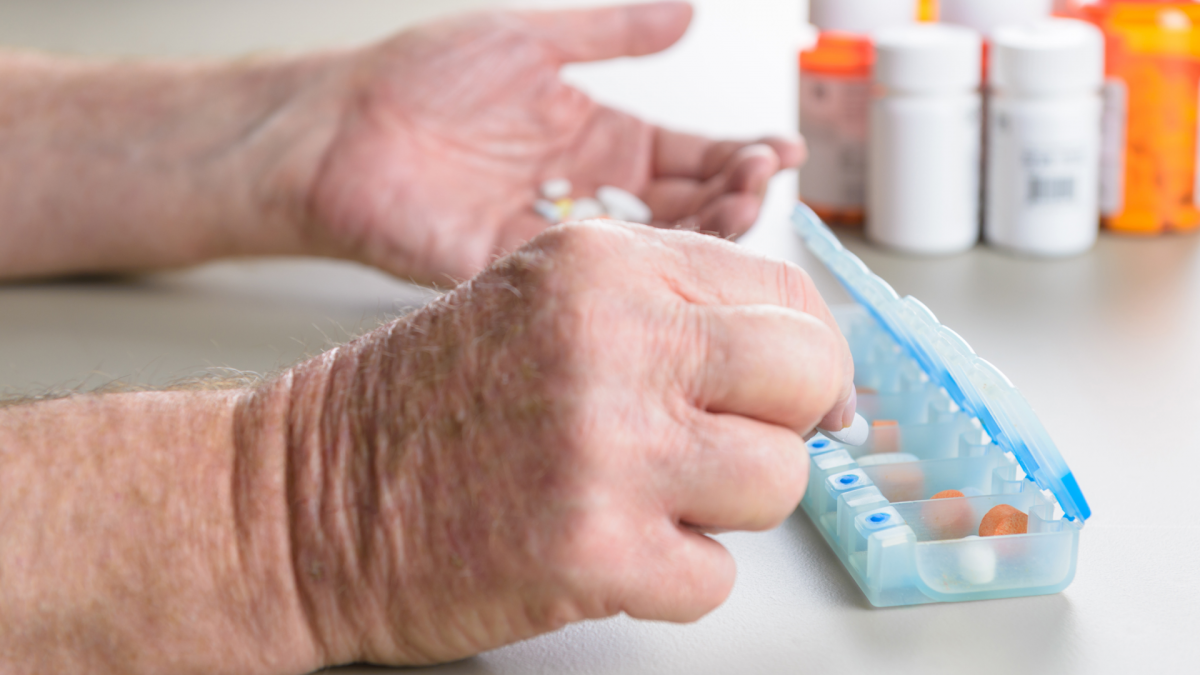 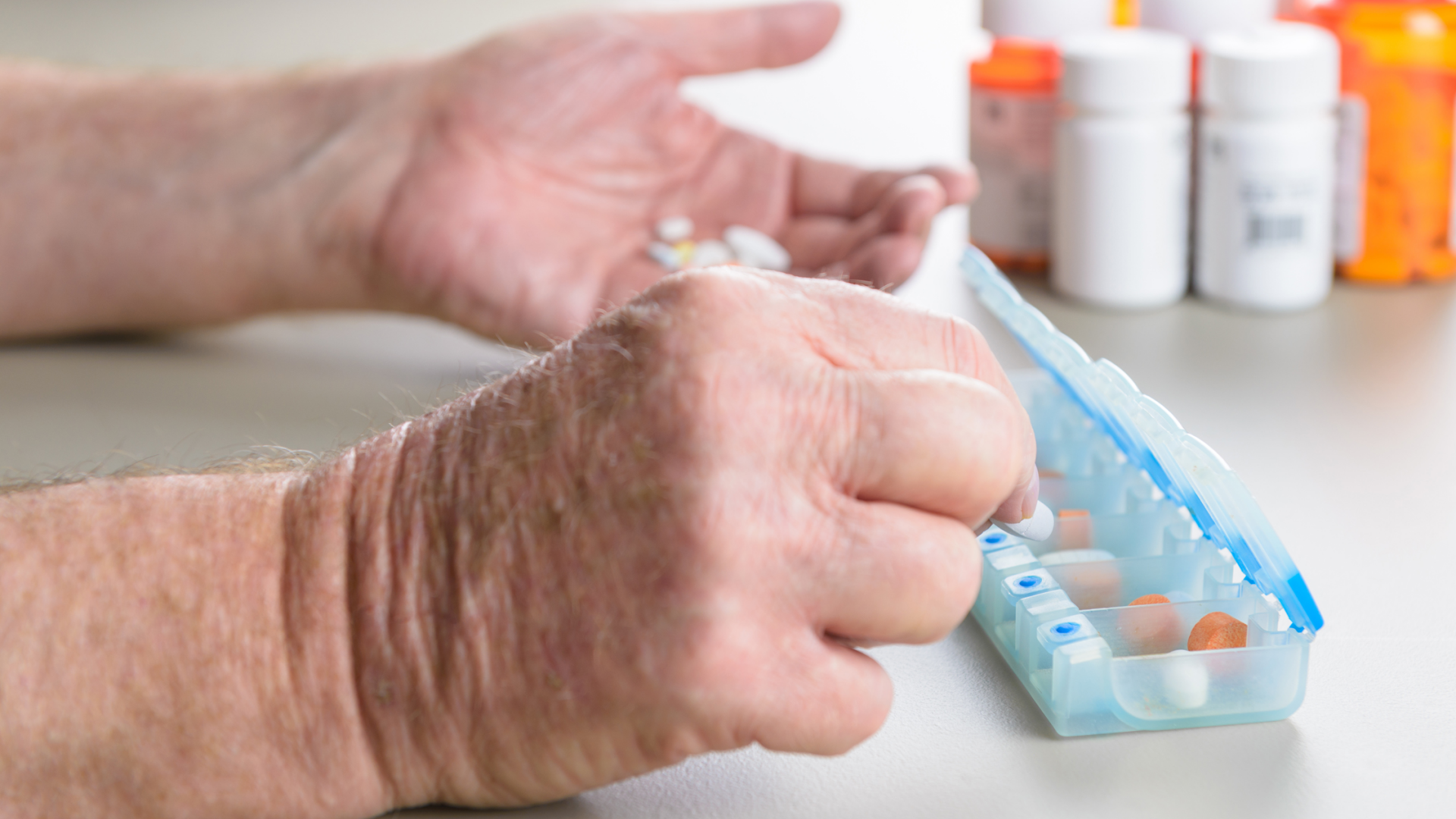 Diane Slomkowski knows about living with chronic pain. For years, she has suffered from fibromyalgia. Then her husband was diagnosed with colon cancer, and her own illness receded to the background as she became his caretaker.

“I have to take care of him now,” says Slomkowski, 64, who lives in Toledo, Ohio. “It’s actually made me realize what it was like for him to take care of me all those years.”

Ronald Slomkowski, 67, was first diagnosed with colon cancer three years ago. A year later, doctors reported the cancer had spread to his lungs. In the meantime, he’s undergoing constant chemotherapy. Although chemotherapy in itself no longer directly causes pain other than nausea, it regularly aggravates his lower-back arthritis, and triggers pain in his hands and feet, according to his wife Diane.

Chronic Pain is Common in Seniors

Up to 50% of older adults living at home, and between 45 and 80% of those living in nursing homes, have significant pain that is often persistent, according to an American Geriatrics Association report. If not treated effectively, chronic pain can become a debilitating condition, especially in older persons. Constant struggling with physical pain can cause depression, anxiety, social problems, loss of appetite and sleep. In contrast to acute pain, which is a temporary sensation following an event such as surgery, chronic pain lasts 3-6 months or longer, often causing additional physical or psychological problems because of its duration.

The Slomkowskis have been living with chronic pain for years. Some days, Ronald will let his wife know when his pain levels are high. Other days, he keeps it to himself. Those are the hardest, for both.

“You can just read it by his actions — he will just sit there and stare off into space and I know something is bothering him,” Diane says. “He doesn’t want to share because he doesn’t want to burden me, but I would rather know because not knowing is worse. I sit there and wonder, what’s going on now? Is he thinking about dying, or is he in pain and it hurts too much to talk about it?”

Then there are the times when Diane takes one look at her husband and heads for the medicine cabinet. “When he looks at me and he’s about to cry, I say go ahead, take the OxyContin,” she says. OxyContin®, a strong narcotic, has become a last resort, because it causes bowel obstruction in her husband.

Finding Pleasure in Life Despite Pain

Yet although chronic pain has made itself an unwelcome, all-too-familiar guest in the lives of the Slomkowskis, they refuse to give it the final word. In the midst of illness, of chemotherapy, of medication, they make the time to take pleasure in life.

“We have a camper and we go out to the camp ground. We sit on the swing. We take walks with the dog,” says Diane, who got a puppy after her husband was forced into retirement because of the cancer. The puppy “brings us much laughter. She does her funny things and it takes our minds off of pain problems.” The couple also goes out to eat and to watch movies-but earlier than most, catching matinees and early dinners, so they avoid the crowds and find the space and quiet they need to have an enjoyable experience.

And there’s nothing like a good madcap comedy on television. “We like that Tim Allen movie,The Shaggy Dog. It doesn’t take much to amuse us these days,” laughs Diane.

The Importance of Good Self-Care

Diane knows she also needs to take care of herself, both physically and emotionally. Because of her fibromyalgia, it is particularly important for her to balance both the needs of her own illness and that of her husband’s. “If I let myself go too much, I’m down,” she says.

A job in the gift shop of a local hospital, she finds, re-energizes her. Socializing with others and focusing on her work takes the attention away from her pain and gives her the energy she needs to go back home and take care of her husband. “When I come back home, I am upbeat and I need that so I can give him what he needs,” says Diane.

Staying active is one of the most effective ways to make living with chronic pain a more tolerable experience, according to Dr. Wayne McCormick, associate professor and section chief of the Division of Gerontology and Geriatric Medicine at the University of Washington. Although it may seem counter-intuitive when someone is experiencing pain, McCormick says clinical trials have proven that being active is valuable for the very reasons the Slomkowskis found it beneficial-it takes the person’s mind off their pain.

“We try to make people continue to be active because when people have pain they tend to focus on it more,” says McCormick. “There have been trials on whether it is best to keep people at rest or moving about with pain. The best is keeping active.”

Chronic pain in the elderly may be caused by a number of factors. It may be triggered by a physical incident, such as a sprained back or a serious infection. Persistent pain may also be linked to an ongoing condition such as arthritis, cancer, shingles, circulatory problems, and muscular conditions such as fibromyalgia and myofascial pain. Other common chronic pain complaints include neurogenic pain (resulting from damage to nerves or the central nervous system itself) and psychogenic pain (pain that is not due physical injury or disease).

McCormick reports arthritis pain is the most common complaint he sees in his patients, who are typically about 80 years old. “It can be the most severe,” he says. “Sometimes women have fractures in the spinal column or elsewhere and that is uniquely painful.”

Seniors often think that chronic pain is a natural part of growing old, and that they have to put up with it. This is a common misperception that can lead to depression, worsening of the pain, and other health-related problems.

There are, in fact, many treatment methods that can effectively reduce the pain and help make it bearable. In addition to lifestyle choices such as staying active, treatments run the gamut from physical therapy to strong medication.

The World Health Organization has established a three-step pain ladder for treatment of chronic pain which starts with simple, over-the-counter medications like acetaminophen (Tylenol®), according to McCormick. Also on this first level of pain management are the anti-inflammatory drugs (NSAIDs), including aspirin, ibuprofen, and naproxen. While not habit-forming, any prolonged use of NSAIDs needs to be under a doctor’s supervision, as they may produce side effects such as stomach irritation and kidney problems. Within recent years, newer prescription NSAIDs called COX-2 inhibitors have become available that have fewer gastrointestinal side effects but may increase the risks of some other, potentially more serious side effects.

Also commonly prescribed at this less-intensive level of pain treatment are ice packs and exercise. Topical drug treatments, such as lidocaine patches, can be used to ease pain in some conditions, as can TENS (transcutaneous electrical nerve stimulation) and biofeedback.

If these treatments don’t help significantly ease the pain, the next step is to add an opioid such as Percocet® (acetaminophen with oxycodone) or Vicodin® (hydrocodone). Stronger opioids such as OxyContin® (a sustained release oxycodone) or morphine for moderate to severe pain represent the final step on the pain ladder.

McCormick says he doesn’t hesitate to prescribe the stronger medications if they appear to be the only way of easing the patient’s pain, despite the risks of some unpleasant side effects like constipation, nausea, vomiting, thought and memory impairment, and drowsiness.

There is also the question of whether patients will become addicted to the opioids because of their narcotic effects. While the chances for addiction by persons suffering acute pain are low, there are several schools of thought about long-term use of opioid pain medication, according to the American Chronic Pain Association report. Arguments for using these stronger opioids stress the importance of patients’ relief from pain, even if that means using opioids for long periods of time. Additionally, many experts such as a panel at the American Geriatrics Society assert that addiction to opioid pain medicines is very rare in older adults. Other medical professionals counter that the side effects, functional impairment, and the threat of addiction linked to opioids means there is no real benefit in taking them.

The American Pain Society and the American Academy of Pain Medicine have issued a joint consensus statement supporting the cautious use of chronic opioid medication for some patients. This entails careful examination by and follow-up with a physician, as well as a thorough discussion of the risks and benefits with the patient.

Alternative methods such as chiropractors, acupuncture, and naturopathic medicine have also proven to be effective in treating chronic pain, McCormick says. Some patients even turn to hypnosis or imaging therapy, he says: “This has to do with the power of the mind and thinking about other thoughts, concentrating on empowerment.”

One of the most challenging aspects for those who care for elderly people living with chronic pain is finding ways to talk about the pain itself. Many seniors are uncomfortable discussing their pain, while others may find it hard to describe it.

Yet pain communication is a key element of successful care for elderly patients living with chronic pain, especially when an aspect of their pain becomes intolerable and needs to be addressed. If a person is reluctant to tell their caregiver about their pain, one of the best ways to gain an understanding of their condition is simply to ask, says McCormick. “All we can do is give people permission to report their symptoms by continuing to ask.”

In addition, caregivers can learn to read when their loved one is unwilling or unable to communicate their pain verbally. According to an American Geriatrics Society report, signs to look for include:

It can also be helpful to debrief the loved one before a call or visit to the doctor’s office. This includes obtaining information about the duration of the pain, whether it is a new pain or recurring pain, its location, severity, and which activities are affected by it. It is also helpful to know what medications are being taken, and what medications the person is sensitive to.

A doctor should be called immediately if:

Do not hesitate to call a doctor for less urgent reasons as well, such as complaints about the ineffectiveness of pain medication, new or different pain, adverse side effects of pain medications, changes in sleep, and difficulty coping with pain.

While communication is essential for addressing critical episodes, it is just as important on a day-to-day basis. Establishing a safe way to talk about pain between loved ones helps keep relationships open and avoids misunderstandings. “Don’t shut people out, let them know,” Diane Slomkowski says. “Don’t complain, just say, okay, I’m having a bad day now, let’s work around it. Take care of yourself but don’t let it be something you focus on all the time; life is too short.”